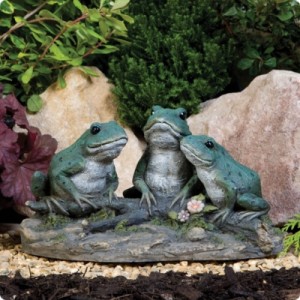 Three frogs are sitting on a log when one decides to jump off.

How many are left?

One only DECIDED to jump.

Deciding to do something and actually following through are not the same thing.

I decided to get in better shape in 2009 because of this story – Beaten By A Stroke: A True Story and even bought myself an automatic shift five speed.

While the bike was pretty, it is also difficult to ride. I peddle like crazy to get it to shift and as soon as I coast down a hill it shifts back to first gear and I have to start all over again. I rode my new bike a sum total of six times before hanging it up in the garage. As a result, I’ve lost and gained the same 20 pounds because I didn’t follow-up my deciding to do better with real action.

Now that’s not to say I didn’t try to do better.

I tried the couch to 5K thing.

I even tried riding my bike with a group.

I wasn’t the best and I quit.

I was inspired but nothing more.

I got sick in 2010 and wound up in the hospital and even had surgery. Again, I’m inspired to do better in this area of my life, but I don’t follow through.  I even read Fully Alive in 2010 – by the same author who now is not only riding his bike, he’s racing it. The dude is 62 at this point.

Another friend, whom I also met in 2009 has completed the Iron Man competition, not once, but twice since then.

I have learned something very valuable.

Inspiration without perspiration is fantasy.

It isn’t enough to keep my sense of wonder, to be inspired, or stirred and do nothing with it. True inspiration births action.

To be fair, I’ve taken a great deal of action in other areas of my life. I’m out there performing comedy when I can, acting in movies, volunteering, and even taking writing classes. I’m feeding my brain and my heart but not my body. I’ve over come many fears and it wasn’t until today when I was riding Prince that I realized I have some physical fears to face.

I’m afraid of getting hurt, which is ridiculous when I consider that I used to compete in Tai Chi and Shaolin. I got hurt all the time. While it’s true I do have a slight disability with my ankle being permanently messed up now, however, that shouldn’t be stopping me.

I’ve been riding horses since February. I’m now at the point where we can gallop for longer durations and are working barrels. Today, the speed scared me. My eyes were on the ground more than they were on the obstacle ahead. Because of that we couldn’t get good speed.

It’s the same with my bike.

I purchased a Giant Brand bicycle from a locally owned shop in Tulsa and it is much faster than my older one.

The speed scares me.

I’ve fallen off more than once and I stopped riding it for two weeks.

It wasn’t until I was racing Prince today, that I realized what was wrong.

I’m looking at the wrong thing.

I’m allowing my fear of pain, not the actual pain, just the fear of it, to keep me from fully committing.

I fixed that today and rode again. It was 33 degrees and sunny.

The wind hurt my cheeks. I froze my tukus off, and my legs hurt.

And I didn’t fall.

I shared on Twitter that I’m riding today and someone asked if I was hardcore or had a conspirator.

I gave him a smart-alack answer at first. “I spent $1,000 on a new bike and my husband made me promise to ride it every day.” — Later I told him the truth, someone inspired me and if he can do it, so can I.

Here’s the deal. I don’t want to be sitting here another year from now, weighing the same as I do today, reading how someone else I know won a triathlon or a marathon while I allow fear to keep me trapped.

So here is my challenge to you:

I promise to face this fear every day, fulling committing to  following through on Ken’s inspiration in my life. What action are you willing to take today that follows through on a decision you made? I’m not asking you to change your life, I’m asking you to name one action or one fear – and face it with me today.  Will you do that? When you do, I want you to pay this forward and be that inspiration for someone else.

This post written by Deana O’Hara for Redemption’s Heart. All rights reserved and all that jazz.